In Thimphu, a total of 15 such school resources attended the training at Thimphu BAF Langjophaka Center. All of them were from Thimphu thromde region, between 4th – 11th December 2016 as part of the first efforts of grassroots program within the western region of Bhutan

In the east, with already Monger and Trashigang covered in 2014-15, the district of Trashiyangtse (specifically at Trashiyangtse LSS), hosted 44 teachers/ sports resources from 19 Lhuentse Schools and 29 Trashiyangtse schools, between 25th – 31st Dec 2016.

Then the new year, saw the start of such basic coaching course start in Samdrupjongkhar for school resources of Sadmdrupjongkhar and Pemagatshel district. On the 9th Jan 2017, like all other participants of the such trainings, the representatives of 21 Schools of Samdrupjongkhar and 22 schools of Pemagatshel took away national recognised certificate and basic learning on shooting forms, techniques, equipment maintenance and international/ olympic format knowledge.

The trainings were conducted with support from Bhutan Olympic Committee, district administrations, the hosting schools, Department of Youth and Sports (MoE) and many other well wishers.

25 Dec 2016   The winners of the BAF Inter-School Archery Competition (held 20 & 21st Dec 2016) is being announced as below in corresponding categories and their prize items. The individual winners are from among the 402 students and teams from 73 schools that participated in the tournament. The tournament is part of the grassroots/ school program dedicated to 60th Birth Anniversary of the 4th King last year.

END_OF_DOCUMENT_TOKEN_TO_BE_REPLACED

The eligible national archery equipment suppliers are hereby invited to send their quotation for the following items by the 14th of December 2016. The successful bidder will have to supply all of the equipment within the month after the award of supply order.

END_OF_DOCUMENT_TOKEN_TO_BE_REPLACED

Aug 10, 2016       If the 5th ranked (11th World Seed) Tuiana Dashidorzhieva thought that it would be easy win over Rio 60th ranked (229th world ranking) woman archer during the first round of the eliminations of Rio Olympics #Archery Competition (#Rio2016), then she was in for surprise. In fact, she may never forget the fight this athlete, ranked some 200 places below, put up.

END_OF_DOCUMENT_TOKEN_TO_BE_REPLACED

A Chance for you to prove to the World how good the Bhutanese are in Archery! 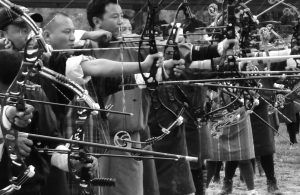 END_OF_DOCUMENT_TOKEN_TO_BE_REPLACED

The Bhutan Archery Federation would like to invite interested youth, between ages of 12 and 21 years to the Summer International Style Archery Coaching Camp to be held starting 11th till 15th July 2016. END_OF_DOCUMENT_TOKEN_TO_BE_REPLACED 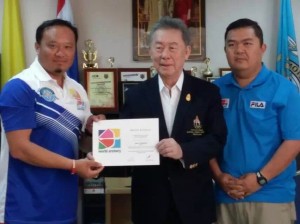 Tashi has expressed his renewed commitment to develop archery in Bhutan and the national team of Bhutan. Under the guidance of Tashi Tshering, Bhutan recently won 5 medals out of  7 categories that Bhutan Archery Team participated during the recent South Asian Games 2016 #SAG2016

Archery Team Starts Off the Medal Tally for Bhutan

During the South Asian Games #‎SAG2016, the Archery team of Bhutan has started off the medal tally for Bhutan by winning medals in 5 out of 7 categories that the team and individuals participated in. END_OF_DOCUMENT_TOKEN_TO_BE_REPLACED

The Bhutan Archery Federation would like to invite bids for the supply and delivery of a projector with following specifications:

25th Jan 2015    The Entry Level Archery Coaching Course have begun from 24th Jan at Sherubtse, Kanglung. A total of 19 participants (School Sports Instructors, PE Teachers) from different corners of Trashigang District are participating this course, which would enable them to teach the interested students in their schools.  The participants would be awarded nationally recognized certificates. There would be 1st Bamboo Recurve Bow Competition held to end the course on the 31st Jan. 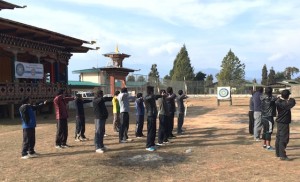