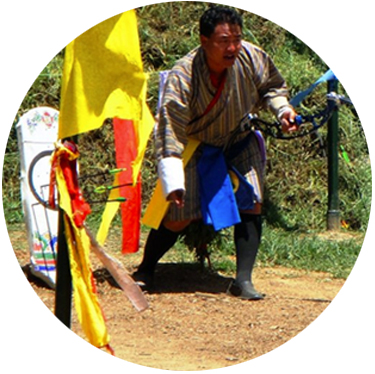 Archery is legend, history, love, divine, heritage, and tradition in Bhutan and in blood of the Bhutanese.

The Bhutanese still speak of the Indian Prince, who in 600 years before the Common Era (yes, 600 before CE) won the much-sought beautiful princess Yosodhara in archery contest that tested not only accuracy and aim but also strength. The prince later became to be known as the Buddha. This is similar to Rama’s winning of Sita’s hand in much known Hindu epic of Ramayana which is dated around same period 5th Century before CE. Both are much talked about in this largely Buddhist country with some Hindus and followers of other faiths living together.

Buddha’s reincarnation to some and great teacher to the most, 8th century Guru Rinpoche and his mastery over archery is also talked as much. Guru Rinpoche, it is said, could “shoot an arrow through the eye of a needle. He could shoot thirteen arrows in a row, one hitting another, and the force of his arrow could penetrate seven doors”

These are before the history books began to keep account of numerous battles that were fought with the Tibetan by the Bhutanese and thwarting their invasions with use of bow and arrow. The Bhutanese successfully overcame eight major Tibetan invasions, one of them combined with Nepalese and other with Mongolian forces. The primary weapons in all of these battles were bows and arrows.

The much-talked Drukpa Kuenlay (the ‘Divine Mad Monk’) found his destiny in Bhutan after he followed a divine vision asking him to shoot an arrow south from Tibet. Following the arrow, he found Bhutan and his destiny now known to every Bhutanese and their visitors.

The legacy of peace that we have been given by our Kings is because of their skill in archery. The father of the first King Jigme Namgyal shot down a general of British forces during the battle of 1864 over the duars with arrow.  The single arrow became the turning point for the victory of the battle. But ultimately, the war was lost and with it some duars/ plains but the battle won respect of the British for the Trongsa Penlop Jigme Namgyal, the Bhutanese and their skill in archery. Since then the Kings and Princes have mastered the skill of archery and embodying them to be ultimate defender of sovereignty of our nation.

Because the skills of the Kings and our ancestors, we have been handed the era of peace, where we can practice archery for tournament and revelry instead of battles that it was intended for during their times. Since it was for the practice for the battles that archery matches evolved from, it evolved into a man’s sport (women as head of household took to raising the farm, while men were sent into battle by them).

The archery during the peacetimes traditionally has been played between villages that became fiercely competitive with honor at stake mainly and other namesake prizes of feasts and sweepstakes. The tradition continues till now.

Like field archery elsewhere, the targets are placed long distance. In Bhutan, such ‘long’ distance is 145 m, with archers going back and forth between two targets at the end of such length range. They shoot one pair of arrow each way, before going to other side to shoot back.

One can shoot in traditional archery with any kind of bow, provided that that it is done with finger release and there are no mounts aiding the sights. As numbers would show, many prefer compound bow and with it (as many exclaim), the Bhutanese archers are able to hit the targets at such a distance with remarkable accuracy and frequency.

But despite such a skill, the Bhutanese compound bow archers are not able to compete in international competitions because no sights and mechanical releases are allowed. Except for few sidelined tournaments celebrating indigenous exhibitory competitions, there are no international compound bow tournaments that are played on finger release.  Despite the talents, because of rules in traditional archery, the Bhutanese archers are heavily handicapped.